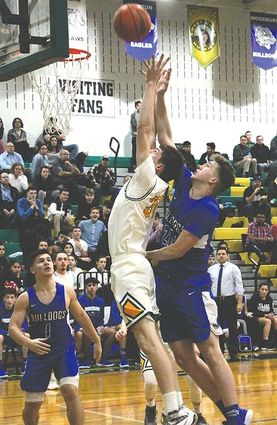 JAKE SWANSON takes the ball to the hoop as Reese Miller defends.

Sweet Home picked up two losses last week in boys basketball, falling to Woodburn 74-40 at home on Jan. 29 and at Philomath 58-46 Friday night.

The Huskies fell from ninth to 13th in statewide rankings as a result.

It's a tough league, said Coach Drew Emmert. "You can't take a night off."

If the league ended right now, all seven teams would make the playoff schedule based on rankings, he said. Cascade, currently in fifth place, is the lowest-ranked team at 19th.

Three Oregon West teams, including fifth-ranked Woodburn and ninth-ranked Philomath, remain in the top 10. The Huskies were sche...