Winning it all in Salem 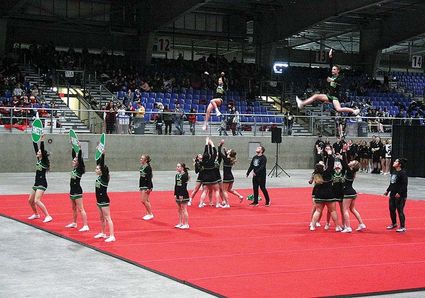 The Sweet Home High School varsity cheerleaders perform their routine at the OE Classic Competition in Salem Saturday, Feb. 2. The varsity placed first among four teams and was grand champion among 14 JV and 1A through 4A divisions. The youth were first among eight teams. Juniors were third among six teams. The JV band dance team was third among five, and the JV fight song team was first among six. The varsity will compete at the state championship competition Saturday, Feb. 9, at the Veterans Memorial Coliseum in Portland. "They are looking strong, peaking right on target as we go into state," said Coach Amber Rosa. "It's going to be tight between the top three teams in our division, but we hope to be at the top at the end of the day."