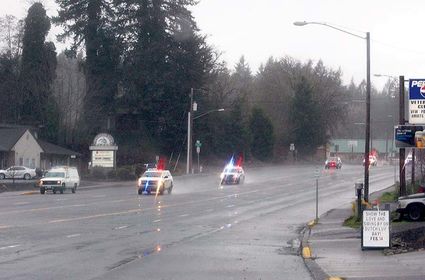 POLICE cars stream down Highway 20 on Feb. 14 during the pursuit of a suspect, who flashed by to the left before the photographer, who had pulled over, could get his camera up.

A new arrival to Lebanon is in custody in Linn County Jail after leading Sheriff's deputies on a pursuit through Sweet Home that ran from Albany to Milepost 48 on Highway 20 on Thursday afternoon, Feb. 14.

Derrick Tyree Smallwood, 28, of Lebanon, was arrested after being tracked down by a police dog in the mountains east of Sweet Home. He was in jail after being arraigned Friday on 17 counts, three of them felonies, with bail listed at $50,000.

According to Sheriff Jim Yon and court documents, a suspect vehicle, a red 2000 Honda Civic with Illinois plates, was involved in a theft of gasoli...