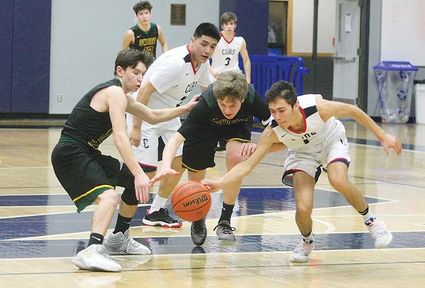 ZACH LUTTMER, left, and Aiden Tyler scramble after a loose ball during the Huskies' play-in game at Newport..

The Huskies lost a play-in game 58-49 in a rematch at Newport Friday evening, ending their season in state playoffs with their entire league, after losing their final league game 62-58 at home on Feb. 19.

Woodburn and Stayton won automatic berths in the first round of state playoffs.