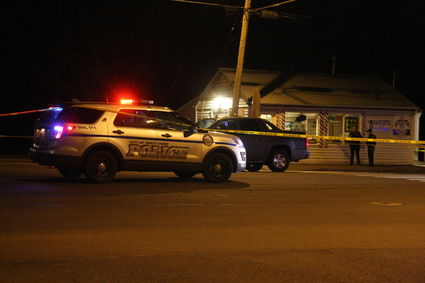 Police investigate the scene at 22nd Avenue and Main Street Friday night, March 15, where a woman was struck by a vehicle and the driver then killed himself.

Sweet Home police continue to investigate the death of an elderly male who, they say, killed himself following a motor vehicle collision involving a female pedestrian Friday evening, March 15.

Police Chief Jeff Lynn told The New Era that police responded to a report of the collision at 7:49 p.m. Friday at the intersection of 22nd and Main streets.

According to police, the involved vehicle, a grey Chevrolet Avalanche, had been traveling westbound on Main Street. The pedestrian who was struck, subsequently identified as Katrina Hadland, 45, of Sweet Home, appeared to have been crossing the street in the crosswalk, southbound across Main Street.

"When officers arrived on the scene, medics were already here," Lynn said.

Responding officers discovered that the male operator of the vehicle had suffered a self-inflicted gunshot wound, which was determined to have occurred just after the pedestrian was struck by his vehicle, police said.

The male driver, identified as Lon Salladay, 77, of Sweet Home, died at the scene.

Salladay was the only occupant of the vehicle, police said.

Police said Saturday morning that "at this time there is no indication that Salladay and Hadland knew each other."

The female was transported to Samaritan Lebanon Community Hospital by medics, Lynn said.

A woman who identified herself as the daughter of the victim posted later on Facebook that her mother was in critical condition Friday night and was in surgery at Health Sciences University Hospital, where she had been taken via Life Flight.

The investigation is still ongoing, police said, and anyone with information related to this case is encouraged to contact SHPD Officer Dave Hickcox at (541) 367-5181.