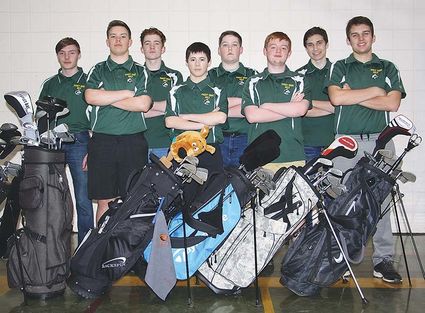 BOYS GOLF TEAM members include, in front, from left, Carsen Perry, Alex Kisselburgh, Bryce Hillsman, and Chrisopher May. In the rear, from left, are Joseph Hiemenz, Braden Keesee, Dakota Melkvik and Kolton Ertsgaard. Not pictured is Carson Smith.

Coming off a state tournament appearance, the Sweet Home boys golf team is looking at some new opponents that look to provide some serious competition for a return trip.

But Coach Pat Davis isn't complaining. Davis, who is beginning his sixth season at the helm, has eight boys and four girls out for this year.

Of course, one of the big challenges thus far has been actually getting onto grass. As of last week, after – on paper, anyway – nine days of practice, the Huskies had been to a golf course exactly once, thanks to four snow days and various schedule hindrances.

"We've been in the Activity Gym most of the season so far," Davis said. "We got out to Mallard Creek Monday (Feb. 4), where they actually got to watch the ball fly."

He said Sweet Home isn't the only team that's been watching the snow come down.

"It's true for just about everybody," he said, noting that a girls match scheduled for Monday, March 11, at Crooked River in Terrebonne had to be cancelled because the course is buried under 3 feet of snow.

"One coach said they haven't even swung a club yet. On the east side of the mountains, they're talking about hitting Whiffle balls. It's not like we're alone. It's not like anybody has a major advantage."

Gone, for the girls, is Haley May, who finished third in the district championships and 12th at last year's girls state tournament as an individual. May is now playing golf for Corban University, but Davis said she stopped in Feb. 27, an off day at college, to deliver some encouragement to her former teammates.

"It was good to have that leadership," he said.

Returning from last year are juniors Rebekah Fassler and Brook Womack, both of whom have played with the Huskies since they were freshmen. Fassler has taken some lessons, Davis said, and both have hit the ball well – inside the gym.

"Rebecca has played off and on all year," he noted.

Also returning are junior Lexi Schilling and sophomore Maren Weld, who also have been practicing and whose skills are improving, Davis said.

New to the team is freshman Bailey Womack.

The girls just missed qualifying for the state tournament last year as a team, led by May, and this year 1A/2A/3A/4A girls have been divided into four districts, with Sweet Home assigned, as the northern-most team, to the 25-team Special District 3, which stretches east to Klamath Falls and south to Medford and Cave Junction.

With teams like St. Mary's of Medford, last year's runaway state champion, Cascade Christian and Marist, Davis said, the competition for a state berth is going to be stiff.

St. Mary's placed three girls, only one a senior, ahead of May last year, with freshman Baylee Hammericksen winning the state individual title, shooting 70-72-142.

Cascade Christian tied for seventh last year and Phoenix, also in the district, was 12th.

"I have no clue," Davis said, noting that the district has three more teams than the next closest-sized of the four, and the northern district, which includes the other teams in the Oregon West League, only has 11. "We've expanded."

The district tournament will be at Rogue Valley Country Club in Grants Pass.

On the boys side, the Huskies also have returning varsity golf experience in junior Carson Smith and sophomores Brayden Keesee and Christopher May.

Keesee led the Huskies to an 11th-place finish at the state tournament last year as a freshman, shooting 85-94-179, after a second-place finish in the Special District 2 championships the week before.

Davis said he expects all three to consistently shoot under 100, "maybe in the 80s and low 90s."

"We have three guys who can score."

Back as well is junior Kolton Ertsgaard, who played JV last year but is a challenger for a varsity slot this year, Davis said.

"His swing has improved tremendously. The little I've been able to see so far has been promising.

As of Friday, March 8, the Huskies had four freshmen, "which is awesome," Davis said, with the possibility of a couple of more additions to the roster.

Alex Kisselberg and Carson Perry both bring some golfing experience, and Dakota Melkvik and Bryce Hillsman are new to the game, he said.

"I haven't seen any of these new kids putt or hit out of the sand," he said. "It's always nice when a kid has had some exposure to golf. We'll see where that takes us."

With at least eight players, the Huskies have enough for a varsity team and a "junior varsity coalition," as Davis put it. "There's room if somebody gets into trouble with grades or gets an injury."

As with the girls, the 4A boys districts have been realigned, with Sweet Home in the largest of the four, which has had Marist and Marshfield, both strong teams, added in, along with Woodburn, which has moved down from 5A, while North Marion moved north to District 1.

Another change for Sweet Home is that it won't be based at Mallard Creek this year, because of scheduling constraints and cost, Davis said.

Instead, the Huskies will split their practice time between Pineway Golf Course and Pine Ridge, outside Marcola, where they will host a boys and girls tournament on April 29.

The boys will open Wednesday, March 13, at Trysting Tree in Corvallis. Districts will be May 6-7 at Tokatee in McKenzie River and the state tournament will be May 13-14 at Emerald Valley in Creswell.

The girls' schedule is still in flux, Davis said, thanks to complications in nailing down dates, compounded by the snow. They opened Monday, March 11, at Bandon Crossing, and will play Friday, March 15, at Fiddler's Green in Junction City in a match that will also include JV boys.

Assisting Davis with coaching will be former Husky Bryce Daniels and Darren Perry.

"Bryce has brought energy. He's super excited to be out there," Davis said. "Darren is just amazing with kids. He's patient, tolerant, and he knows the game. It's pretty exciting to have this staff right now.

"We're looking at a fun year."