Police in standoff with armed male at Clark Mill 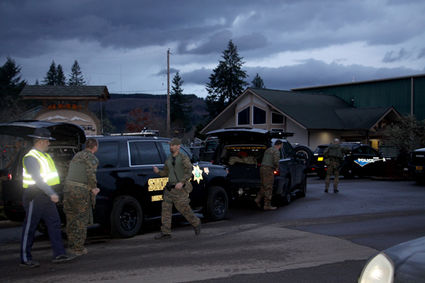 Police officers gear up at Melcher Logging off Clark Mill Road near an armed standoff.

A high-speed pursuit ended in a standoff Friday night (March 22) between an armed male subject and multiple law enforcement agencies and the arrest of a 50-year-old man in the area of Clark Mill Road.

Darrell Loren Schilling, 50, of Sweet Home was charged with fourth-degree assault (domestic violence), menacing, violation of a no-contact order, felony attempt to elude, reckless driving and unlawful use of a firearm and criminal trespass with a firearm.

Sweet Home Police Department responded to a report of a disturbance and possible assault at approximately 5:34 p.m. in the 2200 block of Ironwood Street.

While responding, officers observed a male involved in the incident leaving in a vehicle, said Communications Supervisor Penny Leland. Officers attempted a traffic stop, but a pursuit ensued.

The pursuit lasted approximately one mile, ending when the subject stopped his vehicle in a wooded area east of the former Knife River quarry property and north of Clark Mill Road and the ponds, said Police Chief Jeff Lynn.

The subject exited his vehicle with an assault-style firearm, said Sgt. Chris Wingo. The subject refused to comply with officers’ commands and took up a position of cover at the front of his vehicle. Officers attempted to communicate with the subject, who was the only occupant of the vehicle, but he would not respond to their attempts.

Linn County Regional SWAT responded to assist with its assets and negotiators.

The subject did not respond to any attempts to end the standoff peacefully, Wingo said. Because the incident lasted into Saturday morning (March 23), Lane County SWAT responded to assist and relieve Linn County Regional SWAT due to the prolonged time frame of the incident.

During the incident, police closed access to Clark Mill Road north of Highway 20.

At approximately 5:30 a.m., the subject surrendered and was taken into custody by Lane County SWAT without injury to himself or any law enforcement officers, Wingo said.

Schilling was lodged at the Linn County Jail. 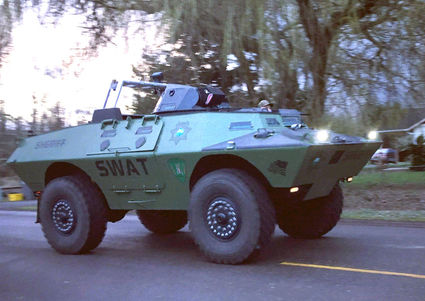 A SWAT armored personnel carrier travels on Clark Mill Road toward the site of an armed standoff.

Lynn said Sweet Home police have had multiple contacts with Schilling related to ongoing domestic issues this year beginning with an arrest on Dec. 31. He is charged with harassment in connection to that arrest. He is set to appear in Circuit Court next on March 27.

He also faces charges in Linn County Circuit Court on two separate Lebanon cases from earlier in 2018 for second-degree criminal trespass and theft of services, with his next court date set for March 27.

Schilling was arrested earlier Friday in an unrelated case.

Wingo said police responded at 3:47 p.m. to a report of two males fighting inside Safeway, 1540 Main St. Police arrested Schilling for second-degree disorderly conduct. The second male was transported to Samaritan Lebanon Community Hospital and was not charged.

The event leading to the standoff occurred after Schilling's release from jail at Sweet Home Police Department.

Police have had six additional contacts with Schilling this year.