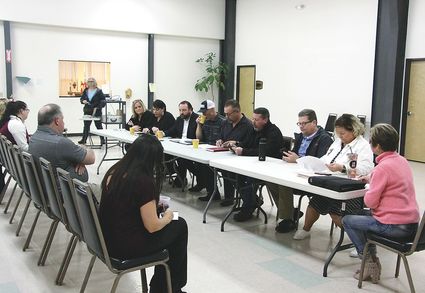 MEMBERS OF SHEDG and the public sit before the Sweet Home Economic Development Group Board of Directors, right, to hear an annual report on the organization and to elect board members. The annual meeting was held at Sunshine Industries.

Meanwhile, President Ron Moore said, SHEDG is working toward developing a concert grounds and park on the former Morse Bros. property on the north end of Clark Mill Road.

Several SHEDG members attended the meeting held at Sunshine Industries, in which Moore and Shamek highlighted some of SHEDG's progress and projects for the year.