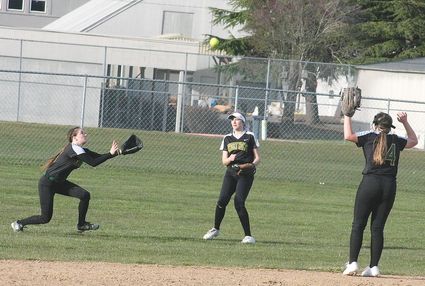 MARISSA KURTZ, left, races after a fly ball to get the game-ending out against Banks. Backing her up are right fielder Samantha Virtue and Emily Brown at second base.

The second-ranked Sweet Home softball team launched its season in a big way, shutting out ninth-ranked Banks 2-0 in a pitchers duel at home Friday afternoon.

"That was a big win for our program," said Coach Karyn Hartsook. "Savannah Hutchins did an outstanding job in the circle, got her work done."

Hutchins struck out seven on the way to the win, while Kaylin Hernandez struck out four Huskies. Hutchins gave up three walks and one hit. Hernandez gave up two walks, four hits and two earned runs.

"Her (Hernandez) speed along with some of her pitches definitely got us," Hartsook said, but the...