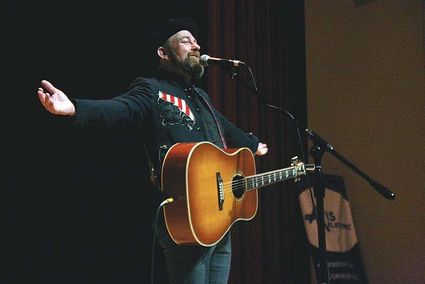 Kristian Bush of Sugarland performs as the Mystery Artist Friday night, Marc h 29, during the Oregon Jamboree's 2019 Mystery Concert at LaSells Stewart Center at Oregon State University. Bush performed with his brother, keyboardist Brandon Bush of the rock band Train. Also performing Friday was local musician Jobe Woosley in a heated tent outside the entrance. Brittnee Kellog kicked off the show inside. Adam Larson and Company opened for Kristian Bush. "It was amazing," said Festival Director Robert Shamek. The event had a great turnout, with few empty seats. The Mystery Concert is one of several extra events the Jamboree conducts and promotes during the year. Coming up will be a series of concerts at the Veterans Home in Lebanon, with followup performances for the public.