Dodgeball tournament turns out to be real hit 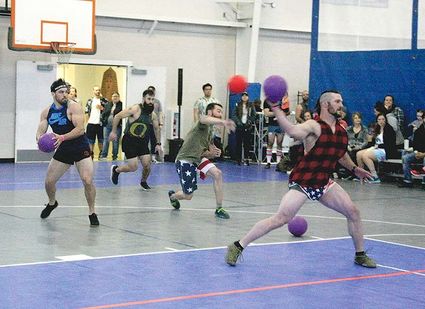 Sweet Home dodgeball team Chuck Norris members, from left, Travis Smith, Joe Rosa, Tyler Boschma and Manny Barragan launch attacks on the competition during the inaugural Dodge Ball Tourney hosted Saturday, April 13, by the Sweet Home branch of the Boys & Girls Club of the Greater Santiam. The event attracted a dozen teams from as far away as Portland.

Kris Latimer, executive director of the Boys & Girls Club of the Greater Santiam, wasn't really sure what she was getting into when she decided to hold a dodgeball tournament as a fundraiser for the club.

She had a gym – in Sweet Home – and some local interest. So she put the word out and, presto, 12 teams showed up Saturday, April 13, for the inaugural tournament.

"I didn't really know what to expect," she said. "It was crazy. It was just a hoot."

Beef and brawn showed up dressed in ... creative outfits. A team from Portland showed up, along with another from Eugene – Team Ven...