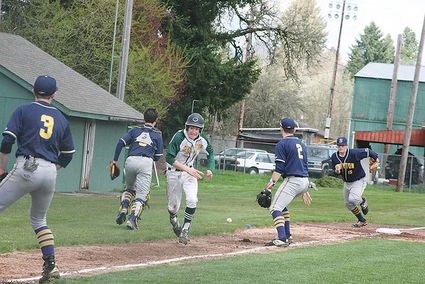 ZACH LUTTMER heads for home to score a run for Sweet Home after escaping a trap against Stayton.

After winning the series two games to one, Coach John Best said the Huskies can win any tiebreakers if necessary for the league championship.

"We're in the driver's seat," Best said. "We just have to win the next three series."

Among them will be ninth-ranked Newport, which also has yet to face Philomath but is undefeated so far in league.

The Huskies also still must play Cascade and Sisters prior to facing Newport.