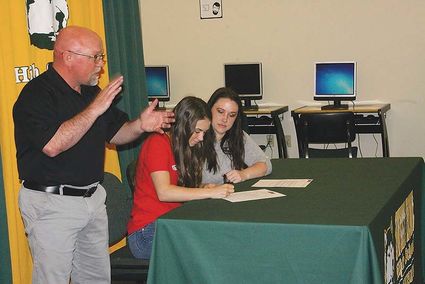 AS COACH Steve Thorpe, left, applauds, Marissa Kurtz signs a letter of intent to compete for Southern Oregon University, with her mother Lisa Kurtz at her side.

Marissa Kurtz has made history already at Sweet Home High School, winning three championships in girls wrestling and serving as one of the primary groundbreakers in the establishment of the sport as an OSAA-sanctioned activity.

Tuesday, April 16, she did it again, becoming the first girl from Sweet Home High School to move on to college wrestling when she signed a letter of intent to compete for Southern Oregon University.