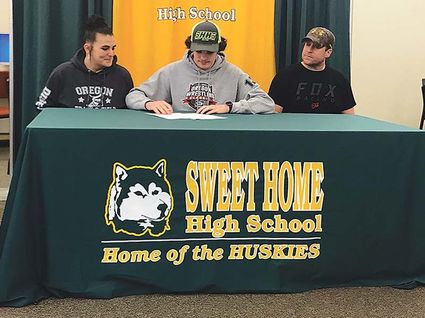 FLANKED by his parents, Athena Noble, left, and JD Watkins, Robert Watkins signs a letter of intent to wrestle for Umpqua Community College.

Watkins, who placed fourth at the state high school championships this year, said he decided to pick UCC because he had connections there.

"I had a couple of opportunities that came up," he said. "It was a goal of mine to wrestle in college."

He said he's known UCC Coach Kyle Temple, himself a Sweet Home wrestling alum, "for quite a while" and noted that he's following in the footsteps of former Husky Kobe Olson, who is a sophomore at UCC.

He said he plans to study criminal justice "to...