Huskies come off rough week in baseball to beat Philomath 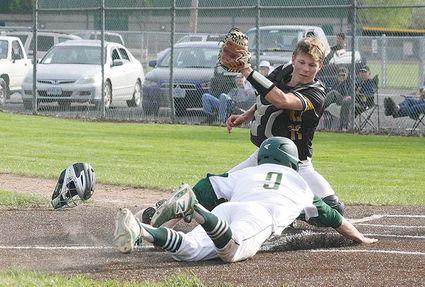 The Sweet Home baseball team smacked into a roadblock last week, losing its series against Cascade two games to one.

The Huskies are scheduled to host Sisters at 4:30 p.m. Wednesday and travel to Sisters Thursday. They will finish the regular season in a three-game series with Newport next week beginning Monday on the road.

Although the Huskies had a rough week, "we still hold the future in our hands," said Coach John Best. Sweet Home is still just two games behind Newport, with the three games left to play next week.

To get into playoffs, "we don't have to do anything weird," Best said. "Just win games. We're sitting pretty good."

If they do what they need to do, his team should lock in a home play-in game, he said.

Neither side got much going offensively in the first game's pitchers duel.

"Both teams lacked offense," Best said. All scoring came on wild pitches and steals. "Pitching was good. Colton threw very, very well. We had opportunities to score but didn't get guys over (the plate). Good quality baseball game."

Nate Virtue got things going for Sweet Home singling on a line drive to left field in the bottom of the third inning. He stole second and third and scored on a wild pitch with Smith, who singled, at bat.

In the bottom of the fourth, Gavin Nichols reached base on a line drive to right field and stole home to score Sweet Home's second run.

Cascade scored in the top of the seventh when Will Ramos walked, advanced to third on a double by Jared Powell and stole home.

In the second game, the Huskies gave up 12 runs in the fourth inning to lose under the 10-run rule in the fifth inning.

Cascade had one big inning, Best said. The Huskies had some errors, while Cascade had some cheap hits and big hits.

"One of those deals you hope doesn't happen very often," Best said. Crediting Cascade, "they took advantage, which gave them a chance to extend the inning."

Sweet Home fell behind early, with Cascade scoring Jake Whisman, who was hit by pitch, on a single and a sac fly. Cascade scored three more times in the first inning. It extended its lead to 5-0 in the bottom of the second inning.

The Huskies got going in the top of the third. Nichols led off with a single, and Dawson Armstrong walked. Zach Zanona hit a fly out to center field, and Cascade turned a double play, picking off Nichols at second base.

The Cougars extended their lead by a run on a double and a single in the bottom of the third.

With three hits by pitch, seven walks, three singles and two errors, Cascade scored 12 runs in the bottom of the fourth while Sweet Home cycled through four pitchers as Best tried to protect pitch counts for the next game. Luttmer got the Huskies of out the inning striking out Colton Gumc.

In the top of the fifth, Virtue stole home to score after reaching on a double and advancing to third base on an error.

For Cascade, Coffey threw all five innings, giving up two walks, five hits and four earned runs, striking out one.

In the third game, Cascade scored a run to take the lead in the seventh inning and get the win.

"We had a chance in that game," Best said. "Their pitching was decent. Virtue threw really well. Dawson came in the seventh and shut them down."

The Huskies had a chance in the seventh with two runners on base, Best said. "We just didn't quite get it done. Another tough-fought win (for Cascade). We didn't take advantage. Cascade did. They didn't quit till the final play was played."

Sweet Home drew first blood, with Luttmer scoring on a single by Nichols. Luttmer reached on a walk. Smith singled to advance Luttmer. They advanced when Tyler walked and loaded the bases.

Austen Olin struck out swinging, and Nichols sent a line drive to right field. Smith was tagged out advancing home ending the inning.

The Huskies tied it up at 5-5 in the bottom of the fifth when Tyler singled, Olin reached on an error by the pitcher and Treyson Smith singled on a fly ball to center field, scoring Tyler.

Armstrong walked, and Zanona singled to score Olin and give the Huskies a 6-5 lead.

Cascade tied the game 6-6 in the top of the sixth with Boyles scoring on a passed ball. Boyles reached on a walk, advanced to second on a single by Isaac Schnepp. He advanced to third on a wild pitch.

Cascade put the game away with Grayson Reeder hit by a pitch and taking first base. He advanced on a walk by Boyles and scored on a single by Powell.

Sweet Home collected 11 hits on the game. Virtue, Colton Smith and Tyler each had two hits. Luttmer, Olin, Nichols, Zanona and Treyson Smith each had one hit.

Luttmer and Tyler each had two runs and one RBI. Virtue had one run and a double. Olin had a run. Nichols had an RBI. Treyson Smith had two RBIs, and Zanona had one RBI.

Virtue got the start for Sweet Home, giving up four walks, five hits and two earned runs with four strikeouts. Armstrong pitched the final inning, giving up one walk, one hit and one earned run with two strikeouts.