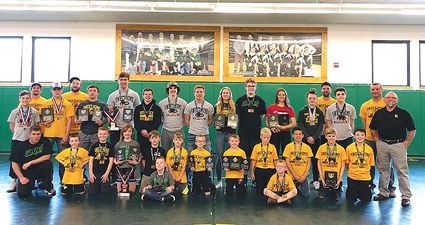 SWEET HOME MAT CLUB members who placed at the state Juniors, Cadet and Kids state championships show off their hardware.

A total of 29 wrestlers placed in at least one discipline in the tournaments, and another Bailey Chafin and Nich James placed at the Reno World of Wrestling, Chafin getting second in the 12U Girls 85-pound Division and James third at 182 pounds in Juniors.

In the state competitions, all held in April,

- Travis Thorpe won a state championship in Greco in the Junior 160-pound division.

- Paige Chafin won a folkstyle title in the 16U Girls 117-pound division.