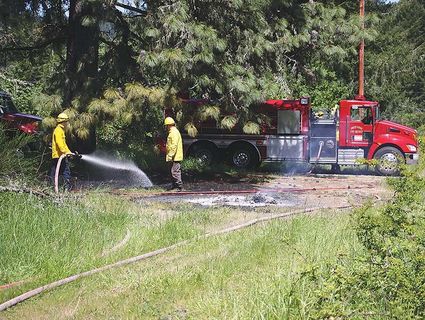 Sweet Home Fire and Ambulance District personnel douse a fire off Green River Drive near Clark Mill Road. Firefighters responded to the fire at 12:20 p.m. on Tuesday, May 7. The fire burned an area of about 50 by 75 feet. The fire was creeping into the brush and according to the fire report started from an unattended campfire. Seven firefighters responded with three pieces of suppression apparatus and a medic unit.

1:03 a.m. - Caller reported that a car drove by slowly, turned around, came back and was parked with its lights off, 1100 block of 38th. Officer contacted the occupants, who were trying to pull wifi. Officer advised them to move on.