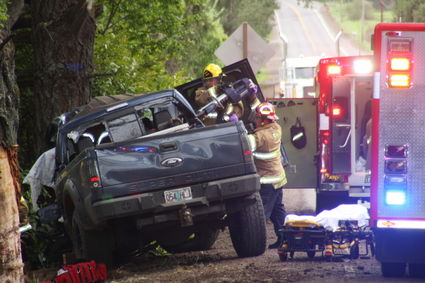 Rescue workers remove the roof from a pickup that slammed into a tree on Highway 228 Monday evening. The driver was later flown by air ambulance to Riverbend Hospital.

A Sweet Home man was injured Monday evening, May 13, when his pickup hit a tree head-on on Highway 228, Oregon State Police said.

According to a police report, a Ford pickup driven by Jerico Joshua Jones, 42, of Sweet Home was headed westbound on Highway 228 near milepost 20, between Valley View Drive and Greenville Road, about 6:15 p.m. when, a witness told police, the truck veered to its left into the eastbound lane of travel, then crashed into the tree.

Sweet Home Fire and Ambulance District personnel responded and extricated Jones, who was trapped in the driver's seat under the engine...