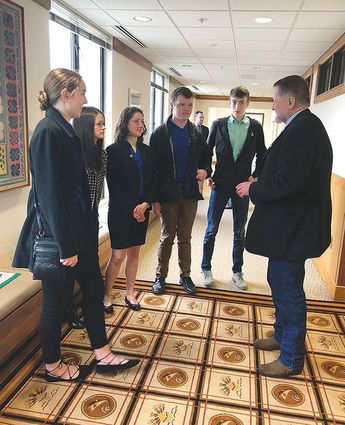 The city's Youth Advisory Council along with a couple of other local high school students visited with lawmakers in Salem recently to learn more about the legislative process and discuss issues with them about issues related to youth and the Sweet Home community.

During the April 10 trip, the teens learned about bills working their way through the legislature and issues important to them as well as sharing their opinions with legislators. Since then they have been working to put together a presentation on their trip for the Monday evening School Board meeting and City Council Tuesday night.

The Youth Advisory Council is appointed by the City Council to provide input to councilors from a youth perspective, said Madelyn Neuschwander, president of the YAC. For youths, it's a way to build self-worth and to do things they feel passionate about while learning about government and respect for property. It promotes community pride while eliminating negative things identified in the community.

Fagan is the one who proposed a voting age of 16 years, Neuschwander said. They had a lunch meeting with several of the officials, including Metzer, who described the legislative process at the Capitol. Following lunch, they talked with the governor.

"She talked about the levers, what you need to be able to do execute and do," said Sweet Home schools Supt. Tom Yahraes, who joined the group on the trip,

City Councilor Lisa Gourley said the group led its own meetings with these officials in contrast to last year's trip, which was the YAC's first time doing it.

Sarah Hewitt, a member of the YAC, said that during their meetings, the students primarily focused on education funding, housing and environmental issues.

Neuschwander said, "We talked about infrastructure as well, understanding Oregon's population is supposed to double in the next 20 years." 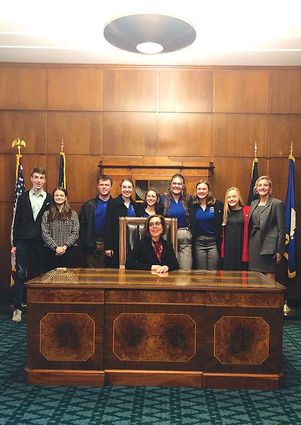 "It was more about discussing what (the issues are), getting information and talking about what we see," said YAC member Anna Coleman.

The group also talked a lot with the governor about her experiences in government, James said.

The students attended a memorial hosted by Sprenger for a Lebanon soldier who has brain trauma, Neuschwander said.

The memorial was held while the soldier "was still alive. That was the most powerful thing to me."

"They talked to us about interning and the page program," James said.

Next, they are focusing on hosting a YAC meet-and-greet to recruit for next year and the youth leadership summit set for July 27.

Yahraes told the School Board the group was professional and it demonstrates a good partnership between the City Council and School Board, with representation by Jim Gourley.