Huskies finish second in baseball race with losses to Newport 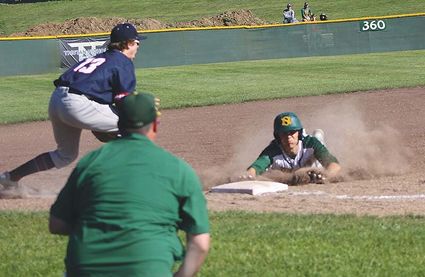 AIDEN TYLER slides into the plate in the second game of Sweet Home's series with Newport.

The Huskies baseball team snagged a sixth-inning lead to win its second game May 8 at home against Newport last week, making its final game Thursday on the road the league championship – whichever team won was the league the champion.

Newport came out on top of that contest 7-4, winning the Oregon West Conference title.

The Huskies finished second, ahead of Philomath. Philomath and Sweet Home ended league last week with 13-5 records. Sweet Home won the tie by defeating Philomath in two of three games this season.

The final game, the third game in the series, "was really close," said Coac...