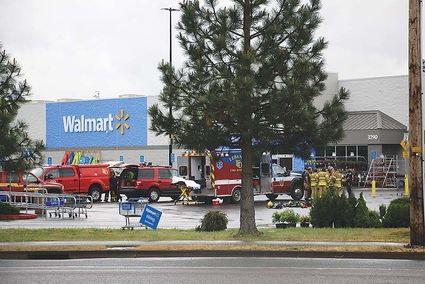 FIREFIGHTERS and equipment fill a parking lot outside Walmart on Tuesday afternoon, May 14, after a fire broke out in an area where chemicals were stored. The store reopened Monday, May 20.

Lebanon police arrested a 49-year-old male in connection to a fire Tuesday, May 14, that closed the Lebanon Walmart Superstore throughout the week.

Joel Lee Reynolds Jr. was taken into custody at the Lebanon Justice Center on Thursday, May 16, and charged with first-degree arson and first-degree criminal mischief. He was lodged at Linn County Jail.

Walmart was evacuated after the fire broke out in an area of the store where chemicals were stored, the Lebanon Fire District reported.

According to police, there were approximately 100 employees and an unknown number of customers inside the s...