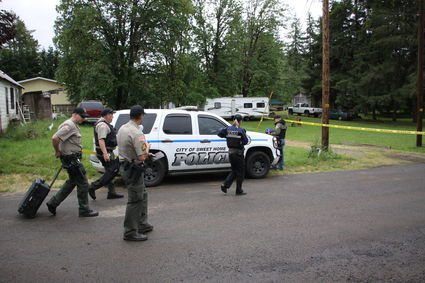 Investigators arrive at the scene on Surrey Lane Friday morning following a shooting that left one man dead and another injured.

Police arrested a suspect Sunday, May 26, in the shooting death of a Sweet Home man.

Page Lee Butterfield, 25, was taken into custody in Sisters and has been lodged at Linn County Jail on charges of murder, attempted murder, felon in possession of a firearm and unlawful use of a motor vehicle.

Sweet Home police have been investigating a May 24 shooting that left one man dead and another hospitalized, according to a department statement.

Corey A. Burdick, 43, of Sweet Home was pronounced dead at the scene. Ervin Larry Smith, 65, of Sweet Home was a victim of a gunshot wound and transported to the hospital. The incident occurred in and around a travel trailer occupied by Smith on the property of 541 Surrey Lane.

During the course of the investigation, Detectives identified Butterfield as the suspect said Police Chief Jeff Lynn. It was also reported to the Albany Police Department that Page Butterfield had stolen a 2008 Red Ford Edge from an acquaintance in Albany.

At approximately 5:45 p.m., after a state trooper spotted the vehicle, Page Butterfield was arrested by members of the Oregon State Police in the Sisters area, Lynn said. Butterfield fled on foot and was eventually taken into custody pursuant to the homicide investigation.

At about 2:32 a.m. Friday, May 24, police the Sweet Home Police Department had received a report that two subjects had been shot on the 500 block of Surrey Lane, off Ames Creek Drive in Sweet Home.

Sweet Home police officers and Linn County Sheriff's Deputies responded to the scene and located the two male victims on the property.

The investigation is ongoing and additional information will be released in the near future, police said.

Lynn said police do not believe any other members of the public are in danger.

For updated details and photos, see the May 29 edition of The New Era.