Baseball and softball move to second round in state playoffs 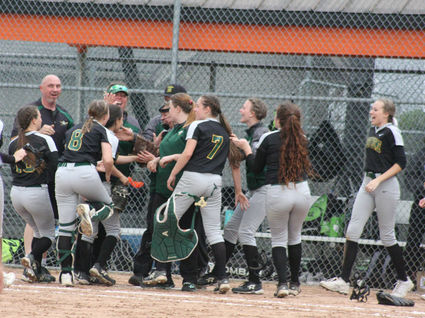 The Huskies softball team celebrates after defeating Gladstone 5-4 in the first round of state playoffs. The Huskies travel to La Grande in the second round.

The Huskies move forward to the second round of state playoffs in baseball and softball Friday, May 24, after beating Gladstone 5-4 in softball and La Grande 2-0 in baseball, Wednesday, May 22.

In baseball against La Grande, Colton Smith went the distance striking out seven batters while giving up just three hits and a walk. Zach Luttmer was hit by a pitch in the top of the seventh to reach base. Travis Thorpe doubled to score him and the winning run. Aiden Tyler, who reached on a walk, scored the second run on a wild pitch.

In softball, the Huskies trailed 4-3 in a tight game at the top of the seventh inning. Bitter led off the seventh with a single. On two outs, Allison Miner shot a line drive out to left field, scoring Bitter to tie the game and reaching second base. Marissa Kurtz reached first and Miner crossed the plate on an error to score the game-winning run.

Gladstone loaded bases on a single, an error and a walk, with one out. Gladstone's Savannah Tunon grounded into a double play at second base, where Bitter tagged out the runner and threw to Maddie Harris at first, ending the game.