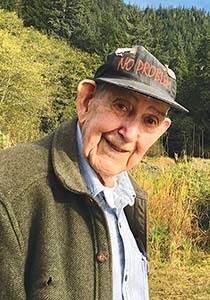 Thomas W. (Tommy) Lewis was born on Oct. 26, 1921, in Foster to Roy Lewis and Bessie Clark. His stepmother, Melita (Boeckel) Lewis, raised him for much of his young life.

Tom lived in the Foster/Sweet Home area until 1942, when he and 16 other young men from the area joined the Navy at the beginning of World War II.

He served as a motor machinist mate until October 1945 on Patrol Torpedo (PT) boats in Guadalcanal and Bougainville in the South Pacific.