Huskies snatch softball victory in upset before losing to No. 1 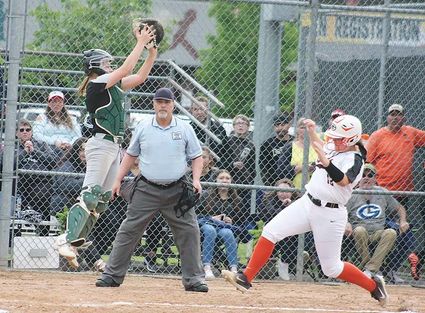 GRACI ZANONA prepares to catch a Gladstone runner at the plate.

Sweet Home snatched a victory from the proverbial jaws of defeat in a 5-4 first-round state softball playoff win May 22 in Gladstone before losing a tight 2-1 contest at top-ranked La Grande in the second round Friday.

"It was fun to watch some girls step up, provide leadership and make a great end-of-the-game play," said Coach Karyn Hartsook about the Gladstone game. "It was incredible field awareness. We're very competitive."

The girls just don't quit, Hartsook said, and they got it done.

The Huskies trailed 4-3 going into the seventh inning. They had been down 4-1.

Sunhee Bitter laid down a bunt to reach first base. Graci Zanona sacrificed to move her to second. Ashtyn Walker hit a fly out.

Allison Miner went to the plate on two outs and on a full count, knocked Bitter across the plate, reaching second base on the throw.

"I started thinking about my freshman year when I was the last out for our play-in game," said Miner, a junior. "I can't be the one that lets down our seniors."

With two hits already under her belt in the game, she vowed not to swing at anything she didn't like.

"That was just a good feeling," Miner said. "I didn't let my seniors down. That meant a lot to me."

"I was thinking this could be my last time out here," Bitter said. "Talking to Allison throughout the season, there's no one else I would've wanted to hit it."

Once Bitter saw Miner hit the ball, Bitter said, she knew she was going home.

"It was the best feeling looking at her after she hit that," Bitter said.

With the score tied 4-4, Savannah Hutchins walked. Miner remained at second base.

Marissa Kurtz stepped up to the plate and hit a ground ball, reaching on an error and giving Miner the game-winning run.

"That was just amazing," Miner said. "I wasn't even thinking about that until I was in the car. It was a really happy moment I got to do that for my team."

In the bottom of the inning, Gladstone put two runners on base on an error and a single.

Maddie Harris, who hasn't had a lot of varsity experience this year, "really stepped up," Miner said. She made a diving catch to get the first out in the inning.

Then Gladstone loaded bases on a walk. On one out, Gladstone's Savannah Tunon hit a ground ball to Bitter in the second baseline. She tagged out the runner and turned a double play to Harris at first base to end the game.

Bitter said she was hyped after the catch by Harris, and when her turn came, "I didn't really have time to think. I kind of just tagged her and looked for the next play.

"I was beyond excited," Miner said. "That was just really cool to watch, and I got to witness it."

"I was super proud of our team," Bitter said. "I've never seen anybody step up like that."

And being together after the game "was a very special moment for me and all the seniors," Bitter said, which includes Bitter, Kurtz and Sydney Mauer.

The two teams started evenly. On two outs in the top of the first inning, Ashtyn Walker scored on an error on a line drive by Miner after reaching base on an error.

Gladstone singled twice with a sac bunt to score its first run, tying the game 1-1 in the first inning.

Gladstone put up three more runs in the bottom of the third on two singles, a double, a walk and a sac fly to lead 4-1.

"Our team really came together that last few innings," Miner said. "Everybody was pumped up. I just feel like in that game, we wanted it more."

In the top of the fourth, Miner and Hutchins singled, and then Virtue reached on an error that advanced Miner to third and Hutchins to second. Jasmine Carter grounded into a fielder's choice, scoring Miner.

Sweet Home scored again in the next inning on singles by Zanona, Walker and Miner, who batted in Zanona, setting the stage for the seventh-inning win.

In the circle, Hutchins gave up nine hits, three walks and four earned runs while striking out two. For Gladston, McLeod went two innings, giving up a hit and a run, and Aubrey Jayne threw five innings in relief, giving up two walks, eight hits and two earned runs.

"We got home from Gladstone and left the next morning," Hartsook said.

Facing La Grande, the defending state champions, Sweet Home gave up a run on three singles in the bottom of the second to trail 1-0.

The Huskies scored their sole run on a single by Kurtz, who advanced to third on a sac bunt by Carter. Virtue singled to score Kurtz and tie the game 1-1.

The Tigers broke away on two outs in the bottom of the sixth inning, scoring twice on a single, triple and single, to take the winning lead.

"It was a really good game," Hartsook said. "I don't think they were prepared for us to play the way we did. It was super-competitive on both sides. Our girls made the defensive plays," but they didn't hit as well as they had hoped.

"That pitcher was really good," Miner said. She believes that Brock, a junior, was last year's 4A pitcher of the year.

"They came in thinking they were going to walk all over us," Miner said. "We were their closest- scoring game in the 4A."

La Grande won most of its games this season under the 10-run rule.

"We competede really well," Bitter said. "I thought they just had a little more experience at a tougher level than we did."

Everyone competed well, she said, and she was very proud of everyone.

Kurtz led the Huskies at the plate, going 2-3 with one run. Bitter, Zanona and Virtue each had a single, Virtue with an RBI. La Grande collected eight hits, led by Lexee Gomes, who went 2-3.

The Huskies wanted to win the state championship, Hartsook said. "You always want more. You always want to go further. They overcame a lot of adversity. I'm proud of them as players and people to get as far as we did."

Adding Emily Marchbanks took the pitchers to a new level, Hartsook said. She brings a lot of college level experience to the team.

Offensively, "we had some kids that were very consistent," Hartsook said. "We also had some excellent base runners."

They could put the ball in play consistently, she said. "They really did a good job." 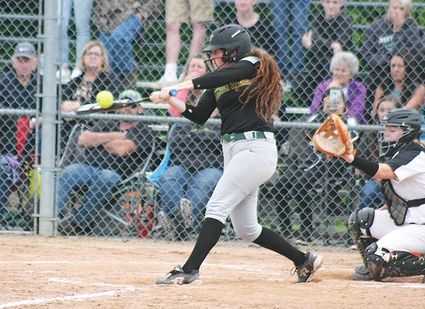 ALLISON MINER connects at the plate for a game-tying run against Gladstone.

"I felt like this was a really good season," Miner said. The team's performance kind of dropped off a little later in the season, "but we pulled it together in the playoffs."

With the result at Gladstone, "the seniors got to play one more game," she said. "I'm just beyond thrilled we pulled it off."

They came together "to win some games and scare some teams," she said. She is hoping next year will be even better.

"We made it further than last season," Bitter said. "that's always a good thing. We overcame a lot of obstacles."

Among them were injuries and switching positions, she said. "I think everybody adapted to the changes very well."

The Huskies finish the season 19-8 overall and 18-7 in league. They were ranked eighth at the end of the regular season.