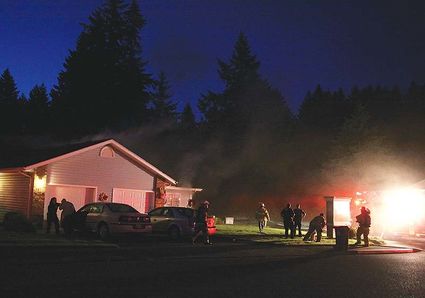 POLICE and firefighters work outside a home early Wednesday, June 5, in Wiley Creek Community in which an elderly woman died in a fire.

A woman died in an early morning fire Wednesday, June 5, in the independent living area of Samaritan Wiley Creek Community.

Firefighters responded to a report of the fire at 1271 Mountain Fir Court at 4:28 a.m. Deceased was Carolyn Olivier-Pye, 71. Fire Chief Dave Barringer said that without an autopsy, fire investigators assume that she succumbed to smoke inhalation.

Personnel arrived to the find the structure heavily involved on the south end of the quadplex.

"A female on Mimosa Court smelled smoke," Barringer said. "Eventually, it woke her up, so she decided to go look."