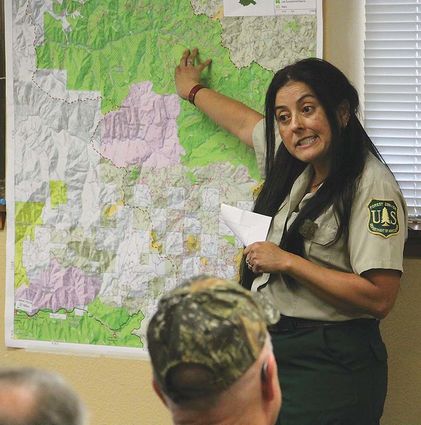 Sweet Home Ranger District officials last week opened the door on a new project that proposes to “manage” some 8,400 acres of timberlands in the Quartzville and Middle Santiam areas, about 20 miles northeast of Sweet Home.

The Willamette National Forest is inviting members of the public to share ideas about the project, which was unveiled at an open house Thursday evening, June 6, and is in the pre-planning stage of the National Environmental Policy Act process.

The “QMS Project,” as it is known, encompasses 89,000 acres, with roughly 8,400 acres proposed for vegetation management, including timber harvest, in an area roughly south and east of Detroit Lake and the Middle Santiam and Menagerie wildernesses.

Other proposed activities include restoration of threatened species, prescribed burning and other fuels treatment, invasive species management, improvements to recreation sites and road maintenance and decommissioning.

“Public participation is vital to shaping this project,” said District Ranger Nikki Swanson. “We have some ideas, but we want to hear from people who consider Quartzville and Middle Santiam special places. Every comment and opinion will be taken into consideration as we develop projects in these areas.”

District Archeologist Tony Farque outlined some of the historical and cultural features of the area in question, noting that it was a center of significant activity for original residents before the arrival of white men, particularly gold prospectors.

Hydrologist and Fish Biologist Lance Gatchell said the project will need to incorporate setbacks for stream preservation. He said one of the biggest challenges to wild fish in the area are the dams.

Silviculturist Autumn Metz showed maps of the proposed project, which would include both the South and Middle Santiam watersheds.

She said the project will propose treatment in a late secessional reserve (LSR) area above the Middle Santiam Wilderness south of Detroit Lake, and another to the east of the Menagerie Wilderness.

The Quartzville area of the project is largely late secessional reserve forest, containing about 20,368 acres of trees less than 80 years old, which account for about 66 percent of the project.

Less than 1 percent of the project involves forests between 80 and 150 years old. All the stands in the LSR are under 80 years old and the average stand age is 35, she said.

She said some stands in the area are unhealthily overgrown.

“Unhealthy trees are more  susceptible to disease, insects,” she said.

“Some of outcomes we’d like to see are moving these stands in the LSR more to old growth, so they grow bigger faster.”

She said another is to provide economic benefit to community.

The project will also include work on some roads, to provide better access for firefighting operations.

“We have direction to close roads, but we also need to leave them open for fire,” she said.

“We’re not going to leave all the roads open, but when fuels specialists and private landowners agree that these are roads that we need to leave open for fire access, we will.”

Road closures, Swanson added later, “are always kind of a fine balance for us.”

Wildlife Biologist Esmeralda Bustamonte said that surveys for spotted owls continue in the area, to determine what’s going on with them and other species that are being “managed.”

Those include red tree voles, which are a food source for the owls, she said.

The stands under consideration in the proposed project are not old enough to support spotted owls, she said, so the Forest Service is not planning to go beyond the surveys.

She said general surveys will be conducted for other “wildlife activity.”

“If we find any, we’ll mitigate accordingly.”

She acknowledged that a pack of wolves is present in the south end of the Middle Fork Ranger District, which means the animals are now acknowledged to be in the Willamette National Forest.

Botanist Alice Smith said the plan will protect “special habitats” –  meadows, rock gardens, ponds, bogs and such, that are usually devoid of trees and are where the majority of plant diversity is found.

She said that one problem in the meadows has been tree encroachment. She said aerial photos of the Crescent Mountain area show one 200-acre meadow nearly half filled in with trees between the 1940s and 1997.

“It’s places like that we’re trying to work to open up again,” Smith said.

She said there are eight or nine sensitive species in the planning area that the Forest Service is aware of and surveys of forestlands over 80 years old will be done for plants, mosses and lichens that are rare.

The good news, she said, is that there are not a lot of invasive weeds in the area, unlike the South Santiam corridor.

“There’s hardly any blackberries out there,” Smith said, though she said there is some Scotch broom and recreational traffic has been pushing shiny geranium and false brome weeds up Road 11.

“We have a crew and we spend a lot of time tending the garden,” she said.

Recreation specialist Stefanie Gatchell said the area has a lot of dispersed camping, which has resulted in litter. She said that the Forest Service has placed boulders across some roads to force campers to walk to sites.

“We’re not closing any sites, but sometimes we do take action,” she said.

The planned logging will affect hikers and campers with noise and truck traffic, she said, but trails will be buffered, and “visual scenery” will be preserved.

An audience member asked whether officials have gauged the economic benefit provided by recreation in the Sweet Home Ranger District.

Joanie Schmidgall, NEPA planner, said they hadn’t calculated that, but “that will be in the document. We will be looking at that in our analysis.”

Swanson said she hopes recreational use will grow.

“That’s one of the things I’d personally like to see here, is more people discover it and help take care of the trails and enjoy their national forest,” she said, adding: “but to enjoy it without leaving garbage.”

Asked whether there are plans to add trails, Swanson said there are none at this time, “but we’re open to ideas.”

He said fuel loads caused by the project will be dealt with through slash burning or ground burning in units.

He said steps have already been taken to work with private landowners and the Oregon Department of Forestry “to create, essentially, a pre-suppression fire plan.”

“If we do have fire in this area, this will create a good package for the management team when they come in to manage that fire, to quickly and efficiently do what needs to be done to protect those lands.”

Schmidgall said the evening was important to gather information about what people want to see in the project “besides the timber harvest.” 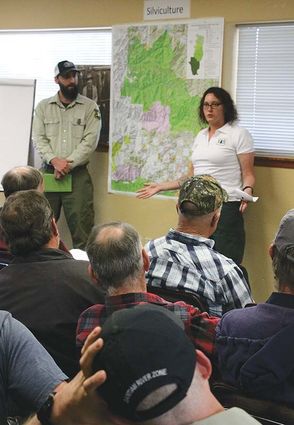 “We’re very pleased with the turnout last night and for all the diverse opinions and discussion that was had,” she said. “It gives us a lot to consider as we move forward with developing that official proposal.

“For example, our private timber-owning neighbors are interested in fire suppression and road access adjacent to the forest boundary. Some of the biking groups are interested in trail access and maintenance. We’re still trying to tease out where all this is (and where we can do restoration etc.) and should have a project proposal and more documentation with more detail this fall.”

To weigh in on the plan, contact Schmidgall at (541) 367-3809 for more information or for special accommodations.