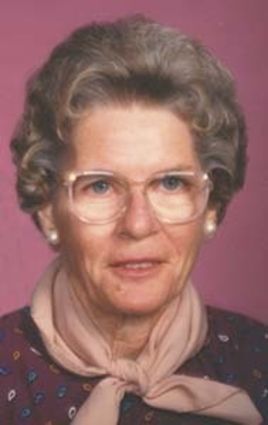 She was born Aug. 31, 1924 in Overton, Neb. to Merritt Ord Woodward and Vivian Lenore (Carpenter) Woodward.Verna was the second of their 10 children and had an older half brother and sister, for a total of 11 siblings.

In 1929 due to the Depression, Verna, her older sister, two younger brothers and half brother and sister moved with her family to Tilley, Alberta, Canada in search of a better economy. Her dad grew corn and other grains on a quarter section of ground.

Verna’s mother and father had a goal for all of their children to receive a high school education. In Canada there was no school beyond the eighth grade, so the family moved back to the U.S. and settled in Nehalem, Oregon.

They were married in Astoria on May 20, 1942. By the end of Jan. 1944 the family had grown to four with the addition of two little boys. In June of 1944, Bill Joined the Army and was serving in the Pacific.

Verna raised the two boys with the help of family until her husband returned in 1946. The family then moved to Sweet Home, where her husband was a logger and Verna became a homemaker for her family.

The family joined the Church of Jesus Christ of Latter-day Saints and attended the Sweet Home church all of their lives.

Verna was very active in the church especially the children’s ministry. She was at one time the president of the church “Primary” and taught, and led worship for children.

Verna also had a 24-year career in the Sweet Home Schools starting in the hot lunch program and then as a kindergarten aide at Hawthorne and Pleasant Valley elementary schools.

Above all, Verna loved and enjoyed her very large family.

Viewing will be at noon Saturday, June 22, at the Church of Jesus Christ of Latter-Day Saints in Sweet Home.

Funeral services will begin at 1 p.m. Final burial will follow at Gilliland Cemetery.

The family has asked that, in lieu of flowers, donations be made in care of Sweet Home Funeral Chapel to the Primary Children’s Hospital in Salt Lake City, Utah or Samaritan Evergreen Hospice.