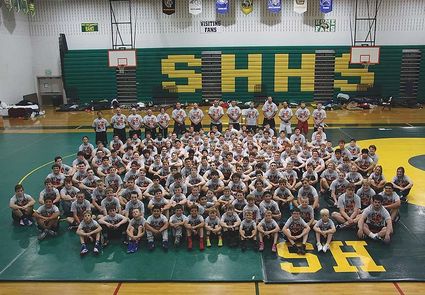 Sweet Home hosted the 19th annual Santiam Wrestling Camp July 6-9, drawing some 130 wrestlers of all ages, left, including girls this year, from around the state. The camp also served as training camp for Oregon wrestlers heading for the national championships, held over the past week in Fargo, N.D. Below, Husky sophomore-to-be Jesse Jamison works on turning an opponent. Both he and senior-to-be Lexi Schilling are competing in Fargo. Steve and Patricia Schilling are there with the Oregon team as staffers, and Coach Steve Thorpe is there as a USA Wrestling national board member.