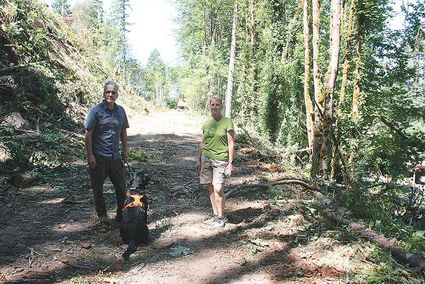 MARK AND LANA HOLDEN stand on South Hills Trail where the city removed a section of Douglas fir trees, left, after some fell last winter during a storm.

The removal of Douglas fir trees along the South Hills Trail last week has prompted some unhappiness for some people who use the trail.

Lana Holden, who regularly uses the trail with her husband Mark, complained about the situation to the City Council during its regular meeting on Aug. 13.

The trees, located above the trail on a slope south of Vista Lane, which led up to private property, fell during a storm on Jan. 7 after a private landowner clearcut the property above the trail in that area....