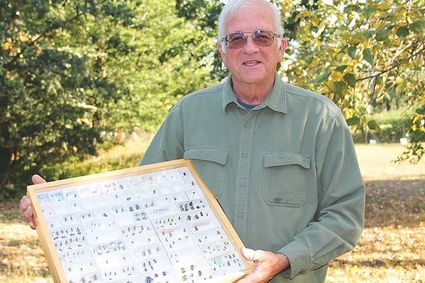 ENTOMOLOGIST Rich Little shows one of his bee specimen displays that he uses in presentations. While he spent much of his career specializing in foreign insects, his passion has always been bees.

Rich Little says he has two favorite types of fairies – both with wings: the fairy bee and the fairy wasp.

The fairy bee is about two millimeters (.07 inch) long, while the fairy wasp is a fraction of that.

You could line seven fairy wasps wingtip to wingtip, and they'd be able to fly like that through the hole of a shirt button, Little said. That's how small they are.

Little, a retired entomologist, is part of a statewide team that surveys the bees of Oregon in an effort to identify and preserve their colonies.

He trains people throughout Oregon to become "citizen scientists" who collect different species and send them to a taxonomist for identification.

The effort is called the Oregon Bee Atlas, and so far they estimate there are more than 500 species of bees in Oregon. By documenting the wide variety of bees in the state, they will be able to track the health of the colonies.

Little said six specimens of a rare Oregon bee species have been collected since they launched the Atlas project last year. He expects they'll discover other new species as the project continues, particularly around the Steens Mountains.

"Because they're big, tall mountains and they're isolated, unique plants have developed there. You can't have unique plants without unique bees. So some of the bees that are found in some of these locations are not found anywhere else in the world."

The Atlas is an initiative of the Oregon Bee Project, which was formed following a massive wipeout of bumblebees in Oregon in 2013, Little explained. In response to the crisis, the state formed an eight-person task force, which included Little.

The Oregon Bee Project was one of 26 recommendations the task force made, and in addition to the Atlas, the Project also revises pesticide training, and recognizes "flagship farms" that proactively help the pollinators.

When Little was on the initial task force for the state, he wanted to add recommendations for the senate to tackle the issue of pesticides. One idea he had was to give the government the power and authority to know what the inactive ingredients are in a pesticide, because those unknown ingredients could be a threat.

Before he retired to Sweet Home with his wife, Kris, the self-proclaimed "bugologist" first worked 10 years for the California Department of Foreign Agriculture as an exclusion biologist.

"My specialty was all of those insects that California did not have and we were trying to keep out," he said.

He trained county staff across California to inspect plants that were entering the state. He was also one of a handful of people on a strike team, quarantining areas where foreign insects were found.

Little then worked 21 years at the Department of Agriculture and the Weights and Measures agency in San Luis Obispo County, and retired as a deputy agriculture commissioner.

During his career, he was involved with detecting the varroa mite in California, the mite that is affecting the honeybees in America, he said.

"We were hopeful in keeping it out by putting a lot of beekeepers under quarantine, but it didn't work. Eventually, the beekeepers spread it around, and it became nationwide, and we're still paying a terrible price to this day, because that's one of the biggest reasons why honeybees are struggling."

Little said there are three major factors that threaten the honeybee: mites, pesticides and nutrition.

Imagine eating tacos for breakfast, lunch and dinner for a month, he said. Then the next month eat only Kung Pao Chicken. The next month, only spaghetti.

Little believes the future of commercial beekeeping is going to change because the current system is unsustainable, but he also believes the farmers and beekeepers won't accept change until the last minute.

"I know it's going to change, but, like most things that man does, it will change when they have no choice."

As it stands today, there's just barely not enough bees to pollinate all the almond fields in California, he said. Some people are starting to take action, though, by introducing mason bees, which are solitary and live in holes. Farmers can provide nesting houses that attract and sustain the bees.

Though Little is retired, he's as busy as a bee. In addition to the Atlas project, he teaches entomology, integrated pest management, soil biology and gardening, and he's a Master Gardener. He's also on the board of Linn County Animal Rescue.

"(My wife) figured out in two weeks what retirement is about, and I'm still working at it 10 years later," he said.

If he could give advice to anyone, it would be to have a garden that they enjoy, with a diversity of flowers and no pesticides.

For more information about the Oregon Bee Project, visit OregonBeeProject.org. 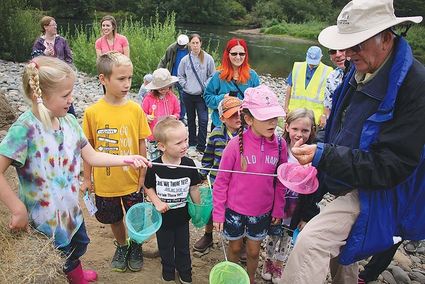