Cross-country boys kick off season with fifth place at Ultimook 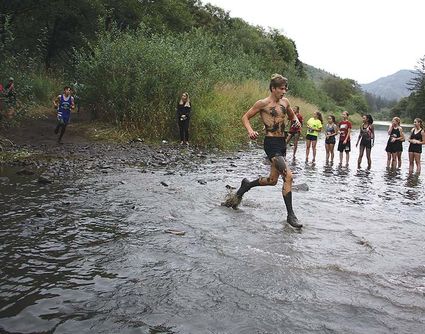 The competition, held on a hydrangea flower farm, included a mud pit that veteran cross-country watchers agreed was one of the muckiest they'd ever seen, along with a pair of river crossings.

It was not a course that lent itself to personal bests, but it gave the many newcomers to the Huskies program a taste of what the sport could be like.

"I think it went very well, considering it's not a typical cross-country course," Coach Kambria Schumacher said. "It will be exciting to see what they do on a normal course."

They will find out Thursday, Sept. 12, when Sweet Home hosts its second annual invitational meet on the grounds at Community Chapel, 42250 Ames Creek Drive and neighboring GB's Trees Christmas Tree farm. Although the course includes a creek crossing and a short but steep hill climb, it will be a better indicator of what may be in store for the Huskies, time-wise, this year.

The Tillamook race drew more than 100 teams from Oregon and Washington, divided into small- and large-school competitions.

Senior Tristan Saultz placed 15th in a field of 241runners to pace the Sweet Home boys, finishing in 17:39.96.

"Tristan's time was good time for that type of course," Schumacher said.

"Jorel did really well," Schumacher said, noting that this was Leyba's first high school race after playing football last year. "He didn't know what to expect. Newbie jitters. I expect him to do really well this year." 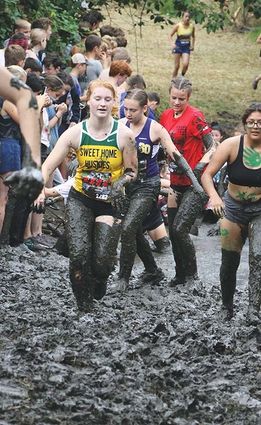 SUMMER HICKS battles out of the mudpit, which greatly increased running times for many.

"That was her first race ever. I expect her to do really well."

The Husky Invitational starts at 3 p.m. Thursday, with middle school races at Community Chapel. Admission is free. Junior varsity races start with the girls at 4 p.m. and the varsity girls run at 5, followed by the boys at 5:40.