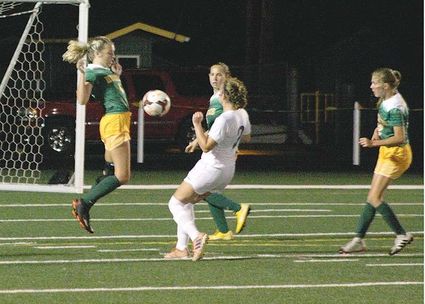 HANNAH POWELL, left, goes up to get control of a ball from Elmira's Paige Reichenberger as Megan Baham, center, and Maddie Harris watch.

Sweet Home's girls haven't had much of a chance to warm up as they move into their league season this week.

One game. The good news, though is that although their Sept. 6 matchup at home against Elmira ended in a 0-0 tie, the defensive ability Coach Ramiro Santana expected to see materialized in a shutout.

"We have a good defense right now," Santana said. (Goalkeeper Moira Curtis) stopped "four pretty close shots by Elmira" in the second half.

Offensively, Sweet Home had opportunities but Elmira's goalie was "good" and the Huskies had trouble hitting the corners of the goal. Still, they...