Huskies 4-0 after first week of volleyball, ranked No. 1 as league begins 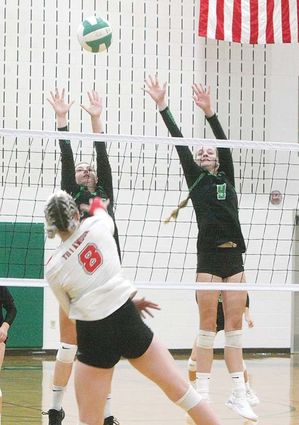 JAMIE SEWARD left, and Shelbey Nichol go up to block a shot by TIllamook's Nessa Hurliman. To see more photos, find this story at sweethomenews.com.

Sweet Home's volleyball team tuned up for its league season opener Tuesday evening, Sept. 10, against Woodburn, with wins over Tillamook and a championship at the Cascade Tournament.

The Huskies, 4-0, are ranked No. 1 in the OSAA 4A poll this week, which is the first time in ears Sweet Home has been considered the top team in the state.

Coach Mary Hutchins said her players were a little out of synch, though it might not have been evident to spectators.