Nearly 1,100 participants turn out for Best in the West Triathlon Series 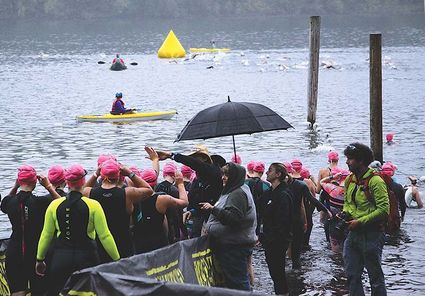 STARTING LINE: Race Director Blair Bronson, center, high-fives competitors as they enter the water for the start of their sprint triathlon race on a rainy Sunday morning, Sept. 8, at Lewis Creek Park on Foster Lake during the Best in the West triathlon series held over the weekend at the park. In the distance, racers in the men's 45-and-over (white swim caps) head toward the first buoy of the 600-meter swim leg. The two-day event included a total of 21 competitions.

Rain and cooler temperatures provided nearly ideal conditions over the weekend for nearly 1,100 registrants in the ninth annual Best in the West Triathlon series, held Saturday and Sunday, Sept. 7-8, at Lewis Creek Park.

"It was great for racing," said Race Director Blair Bronson Monday during the "soggy" cleanup.

The Half Ironman and Olympic events were held Saturday morning, with the Sprint Triathlon on Sunday.

The top overall finisher among the 133 competitors in the Half Iron – a 1.2-mile swim, followed by 56-mile bike ride and a 13.1-mile run, was John Brenteson of Hillsboro, who...