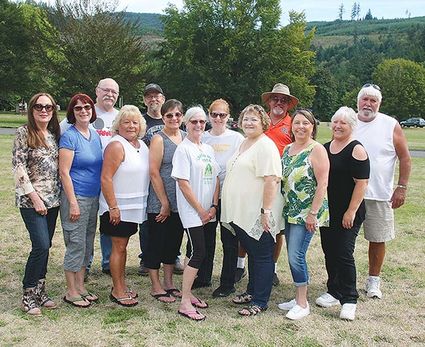 The Class of 1974 held a reunion with a barbecue at Sunnyside Park Saturday afternoon, celebrating the 45th anniversary of its members' high school graduation. From left, in front, are Janene (Baumbarger) Eckelberry, Dawn (Waible) Dalton, Sandy (Lindbo) Lester, Joan (Barnes) Funk, Sue (Harmsworth) Snook, Jan Hufford Wilson, Sherry (Copeland) Groshong, Theresa (Hackworth) Hall and Connie (Dugger) Luehring. In back are Jim Erickson, Dennis Hayes, Randy Jones and Gene Luehring. When these Huskies graduated, the top hits on the radio were "Band on the Run" by Paul McCartney and Wings and "Billy Don't Be a Hero" by Bo Donaldson and the Heywoods. Gordon Lightfoot rounded out the month of June taking the top spot with "Sundown." Also that month, the Universal Product Code was scanned for the first time to sell a pack of Wrigley's Juicy Fruit chewing gum at the Marsh Supermarket in Troy, Ohio, according to Smithsonian Magazine.