Ex-SH woman dies in I-84 crash 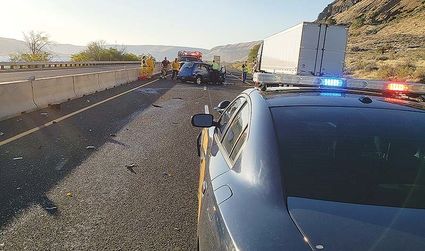 EMERGENCY personnel work at the scene of a fatal crash that killed two drivers, including a former Sweet Home woman, on I-84 along the Columbia River, beyond guard rail at left.

A former Sweet Home resident was killed early Sunday morning, Sept. 15, when her vehicle was struck by a wrong-way driver on I-84, who also died at the scene, according to Oregon State Police.

According to police, troopers responded at approximately 5:44 a.m. to a two-vehicle crash on I-84 near milepost 119, just east of the John Day River.

Police said a Toyota Camry, operated by Josue Amando Lopez-Munoz, 29, of Prosser, Wash., was traveling westbound in the eastbound lanes.  He struck an eastbound PT Cruiser operated by Anita Dugger, 33, of Salem.