Sprenger to run for county commissioner 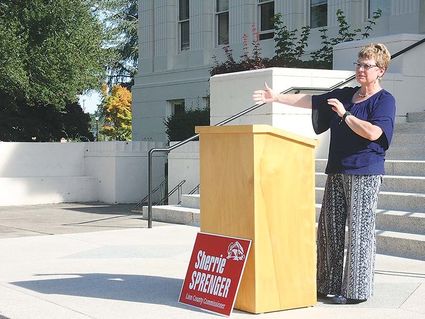 "Earlier this afternoon, I filed for Linn County Commissioner Position 3," Sprenger said. "And I am excited to do this."

Attending the announcement were friends and family, along with the current Linn County Board of Commissioners. Will Tucker, who will end his term in Position Three at the end of 2020, introduced Sprenger. Both are Republicans.

"Part of me didn't want to leave," Tucker said. "I knew this day would come. I think it's time."

He was hesitant, though, because he wanted to make sure someone he could endorse succeeded him, he said. He's been watching for the past couple of years.

"In my search, I talked with Rep. Sprenger," Tucker said. "She's been a person who's helped (with bills in the legislature). She knows a lot about making things happen. It is with great honor, I get to be part of Sherrie's campaign. I think she will be a tremendous county commissioner."

She has the knowledge and ability to exceed anything he has done, Tucker said. "She's a person of honor and integrity."

Sprenger stepped up to the podium with a stack of papers she said were endorsements by numerous individuals, Republicans and Democrats, public and private sector.

"I think it would be a great mistake not to take this opportunity to thank Will for his many, many years of public service," Sprenger said, recalling his service on the Lacomb School Board before it became part of the Lebanon district.

"I'm giddy," Sprenger said. "I haven't felt like this since '08 (when she was appointed to the House of Representatives). I love what I do in the legislature, but this is new and fresh."

She looked around the group gathered at the courthouse, remembering people there, such as retired Sheriff Tim Mueller, who started at Linn County Jail at the same time she went to work for Benton County Sheriff's Office.

"I love these roots," said Sprenger who has lived most of her life in Linn County and her whole life in Oregon, where her son went to Lacomb School, where she graduated from the eighth grade.

She noted she isn't often nostalgic, but that's what Thursday was for her, driving roads she remembered riding when she was a 2-year-old.

"I'm ready to quit going to the Capitol all the time to talk about what we care about here," Sprenger said. "I just really want to bring all that back here."

Sprenger said she wants help continue building what Linn County has been doing.

"There are so many cool things happening in this county," she said, citing the Pipeline program for Linn County students, which helps students connect to industries that are finding themselves without enough workers.

"There are parts of this county experiencing immense economic growth," Sprenger said. "Lebanon's busting at the seams."

Her experience could make all of that a little stronger, she said.

Sprenger said she doesn't make campaign promises, but she did commit to meeting with 100 people during her first 100 days to hear what they have to say: "We'll talk about what you want to talk about."

Tucker said Sprenger has contacts, knowledge and experience in the legislature, and that's what the Board of Commissioners needs.

Afterward, "my intention is to spend a little more time in Africa," Tucker said, and he would like to do some disaster relief work with the American Red Cross.

He first noticed the Red Cross when it put up emergency shelters in Lacomb during the 1996 flood and then this year when the Red Cross helped him while a fire burned outside of Lyons.

Tucker has been traveling to Tanzania for several years with a sea container full of supplies. He recently returned from a trip where he was helping build a clinic. 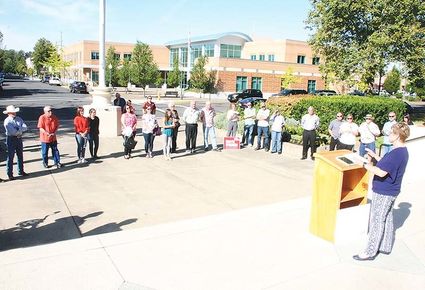 She said she would complete her term next year, which includes a one-month legislative session in February.

The primary election for commissioner will be in May. The general election will be in November 2020.

Chairman Roger Nyquist also will face re-election next year, if he files to run again.