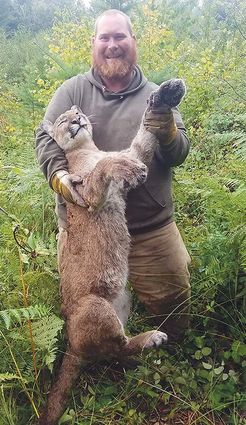 CRAIG HAYES holds a young cougar that killed a goat in Hayes' back yard, then returned the next night, when Hayes shot him.

Craig Hayes says a neighbor warned him when his family adopted a small herd of goats.

"He came down and said he saw a cougar," Hayes said. "He said it's hard to have goats up here."

Monday morning, Hayes was off to his job as a self-employed welder. His son Rafe, 9, headed down to check on the seven goats, some of which were tethered to a fence post in the yard below their house until the Hayeses could get some fences up on their property on the ridge at the south end of 43rd Avenue.

"Our land is really undeveloped," Hayes said, noting that it had been l...