Local man has yet to visit castle, so he builds them 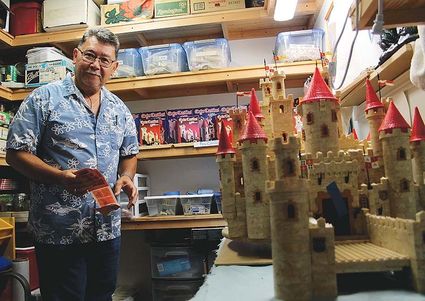 Leo Fernandez, of Sweet Home, shows off a castle he built from Lego-like blocks he discovered at a garage sale. He's won blue ribbons at the State Fair with his creations.

Leo Fernandez says he didn't have many toys to play with when he was a child, so he used his imagination to stay entertained.

"What I played with was a sardine tin can. I used it for a car and I made my own little roads and everything in dirt. I had my own little imagination underneath this tree. I can still remember it, playing next to the milk barn that my dad worked at."

Today, the 69-year-old amuses himself by building castles out of plastic bricks, similar to Lego pieces. Using more than 6,000 of these bricks, his largest construction has won him blue ribbons at the state fair.