After slow start, Huskies wake up and dominate Phoenix in 22-7 win 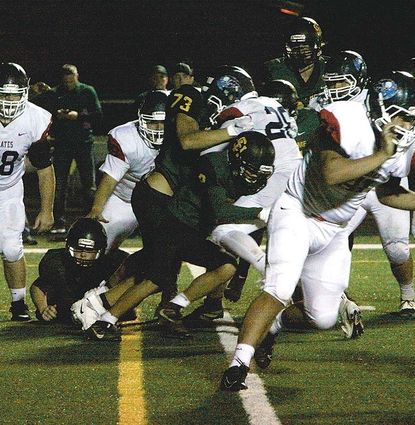 GOAL LINE STAND: Iakona Howerton, 73, and Jackson Royer, center, stop Phoenix's Mike Walker cold at the goal line on fourth down to save a fourth-quarter touchdown and preserve the Huskies' lead en route to a 22-7 win.

After a pair of losses to two of the state's top teams, Sweet Home moved into the win column Friday, Sept. 20, downing Phoenix 22-7.

"It was good that we got a win," said Head Coach Dustin Nichol, whose team had fallen to Marist and Banks, two of the state's top programs, in their two previous games. "The kids played really good all the way around."

Friday could have been a bigger score for the Huskies, who were in the red zone on both of their first two drives of the game, fumbling away the first opportunity at the 5-yard line and then watching four of quarterback Aiden Tyler's passes fal...