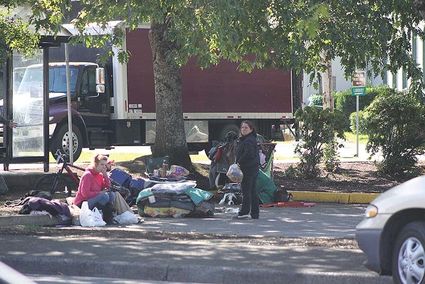 PEOPLE loiter in the parking lot between the Sweet Home Public Library and the old City Hall Monday, Sept. 30.

A possibiltiy of an "exclusion ordinance" banning troublemakers from the downtown area stirred vigorous discussion Tuesday, Sept. 24, as the City Council took another look at the proposal.

The proposed ordinance, which would be based on similar ordinances in place in other communities, would allow police officers to "exclude" or trespass people who are cited or arrested in the downtown area, called an "enhanced law enforcement area," three times in a five-year period.

The first exclusion would be for 30 days. Additional offenses would lead to 90-day exclusions.

The exclusion area would...