Girls move up in league soccer standings after win over Cascade, tie with Sisters 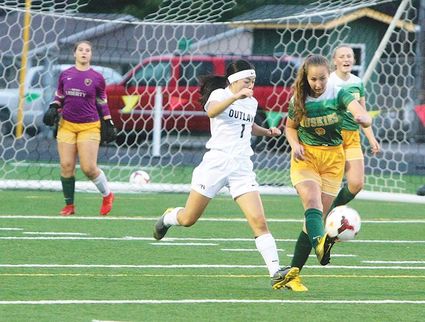 DEFENDER EMILY FARTHING pushes the ball up the field while Olivia Hougham of Sisters pursues.

The girls soccer team snatched a 1-0 win at Cascade and then tied Sisters 1-1 at home last week.

"It was scary," said Coach Ramiro Santana. "We had our moments one way then the other way. We won against Cascade, and then we were actually losing against Sisters. In the last minute, we ended up tying and almost winning."

The Huskies played Cascade evenly, Santana said. The first half, the ball was locked up in the midfield.

"I really thought we'd end up being tied nothing (to nothing)," Santana said, then the Huskies started getting some movement and a few shots on goal.