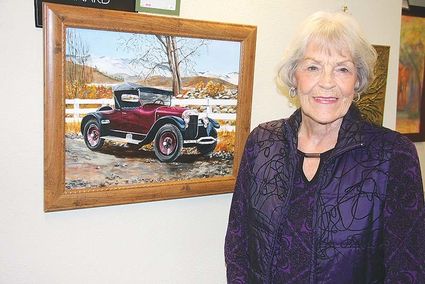 ELDA MILLER stands beside her painting that earned the People's Choice Award in the art display during the opening of the new Sweet Home City Hall.

Elda Miller won the People's Choice Award with her painting of a 1934 Roadster at the Grand Opening, Grand Art local art exhibit at City Hall.

The exhibit coincided with the grand opening of the new City Hall, 3225 Main St., on Aug. 23. Dozens of pieces are on display on the walls of the lobby, hallways, conference room and City Council chamber.

One award, the People's Choice Award, was given, based on votes from members of the public on which was their favorite piece of two-dimensional art.

"I was surprised," Miller said. "That was an honor."

That's particularly notable because "I know...