Music returning to grade schools, in a small way 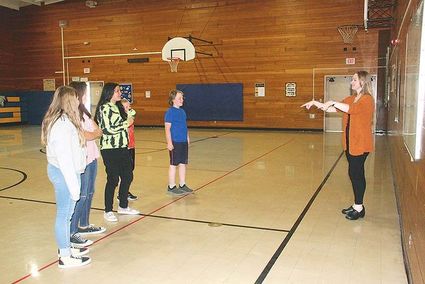 For the first time since it was cut during the 1990s, the Sweet Home School District has an

The district has maintained a sixth-grade band program.

In addition to the junior high and high school programs, choir teacher Alison Hay is teaching fifth and sixth graders choir this year.

"I have a hard time calling it a music program yet, because it's strictly voluntary," said Chief Academic Officer Rachel Stucky. At this point, it's more of a club. "Eventually, it'll be different when we develop a full-blown music program. This is just the beginning."

The class is available at all four elementary schools in one half hour session each week.

Hay held her first class for five students at Foster School Sept. 27. The school had nine permission slips returned, but five attended the first session there.

Oak Heights and Holley were waiting on permission slips and hadn't started yet.

At Hawthorne, she had four students the previous week, Hay said. "I think I'll have seven or eight total."

The sessions are held during lunch recess at each of the schools, Stucky said. "That has everything to do with the collective bargaining agreement."

The district must ensure equitable planning time among all teachers, Stucky said. If the special class provides time for fifth- and sixth-grade teachers, it must provide the same for the teachers at the other grades.

Additionally, Hay has one 52-minute window in her daily schedule to go to the elementary schools, Stucky said.

The "club" is a precursor to much more if Supt. Tom Yahraes is able to tap funds from the Student Success Act later this year.

Yahraes said he wants to implement a music program for every grade, K-12, in the district. The application for the funds is due in January, but district officials remain uncertain about some details from the Oregon Department of Education at this point.

The funding is derived from a .57-percent business tax on gross revenues more than $1 million, with some deductions allowed for labor and capital costs.

"Music has been on our minds for quite a while, since Tom started here," Stucky said. The Strategic Plan calls for outstanding achievement electives and providing a well-rounded education.

Based on the district's strategic planning process and community input, Yahraes said, it's "loud and clear we want to put a music program back into our K-6 schools."

That's one of several priorities Yahraes has at the top of a list on a dry-erase board in his office: "Music is going to be one of the first things that we look at so kids can experience music at an early age. We know it helps learning. I know that music is good for the brain and learning."

Yahraes said he has his 8-year-old son in music, learning to play the piano. He wants to make certain music is available "to kids who otherwise might not be able to experience music."

The goal is for elementary students to transfer to a robust choir program at Sweet Home Junior High and then high school, Stucky said.

"The overarching goal is to get kids singing and expand to vocal music," Hay said. She is introducing the students to basic vocal concepts, studying beats and ways to use them as well as exposing them to music from cultures around the world.

During her first session at Foster, she taught the students "Tongo," a Polynesian song, while "Hawthorne has moved on to another song," a Japanese version of "Head, Shoulders, Knees and Toes."

"We're exposed to using our voices in singing early on," Hay said, in nursery rhymes or just for fun. "(The choir class) gives them a chance to learn how to use their voices in a way that meshes with other voices."

That singing experience will help them as they move into junior high and high school choir, she said, and it will help keep it fun.

With the rise of competitions like "American Idol," people become really concerned "with do I have a good voice or do I have a bad voice," Hay said. It's not as much about fun. This gives children a way to experience structured music while still having fun.

It also helps them in school, she said. "I do know that it can help kids make connections across disciplines."

They learn to problem solve, a key to education, by divining the meaning of the songs, Hay said. As they suss out the meaning of "Tongo," which includes rowing motions along with vocals, they learn it was used as a communication tool among Polynesians to keep canoeists rowing together.

The motions associated with songs like that also help them develop their motor skills while still focusing on singing and pitch, Hay said, and it broadens their minds.

"I really like it," Hay said of teaching elementary students. "It kind of re-energizes you." 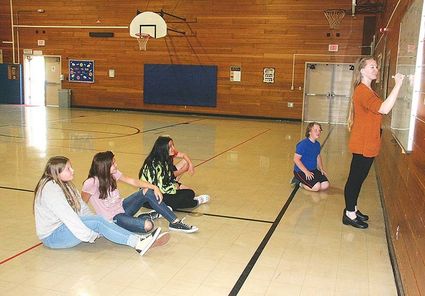 The high school is higher stakes, she said. The students have sheet music in front of them, and they're focused on a concert or competition.

With the younger kids, it's refreshing, Hay said, as they are kind of playing and exploring music.

"It's been really fun so far," Hay said. "I'm just really excited to get it going for everybody."