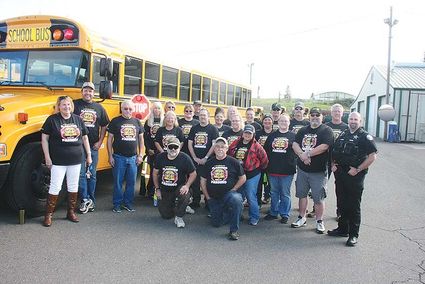 SWEET HOME SCHOOL DISTRICT DRIVERS wear T-shirts emphasizing the need for drivers to stop when the red lights are flashing on school buses.

Leslie Jones and Dick Hamlin wore T-shirts last week to deliver a message to drivers in the Sweet Home area: when a bus' red lights are flashing, that means stop.

They and their colleagues in the Bus Barn say it's a problem.

The start of the school year is when the bus drivers see the biggest problem, said School District Transportation Supervisor Cheryl Hicks, and it can get more common as traffic piles up behind buses.

When the yellows go on, said driver Dick Coffin, it can be like traffic lights, where some drivers think "yellow means speed up."

"There are respectful people that will stop," Hicks said, but drivers should proceed with caution when the yellow lights are flashing and the bus is still rolling.

State law requires that, when red lights flash, drivers are required to stop in almost every location in and around Sweet Home. Traffic may proceed with caution while the bus is still moving and using its flashing amber lights; but when the bus stops and the flashing red lights go on, other vehicles must stop.

According to the Oregon Pupil Transportation Manual, children may be crossing a highway, or the shoulder may be too narrow for the bus to get completely off the main traveled portion of a highway.

Vehicles overtaking a bus must stop, and oncoming vehicles must stop.

The only exception is when the highway is divided by a physical barrier or an unpaved median strip, which in Sweet Home applies only to the section of Main Street from approximately 10th Avenue to 18th Avenue.

Normally, they pull off the road to drop off children, but she warned that Lebanon Community Schools does have some stops on Highway 20 between Sweet Home and Lebanon.

While most often, children are let out where they will not need to cross the highway, it's still important to stop, said driver Leslie Jones.

She's seen them get off a bus and cross the road unexpectedly, she said.

"We are handling the most valuable cargo on earth. These are human beings. They're irreplaceable."

Sometimes drivers overcompensate and stop in the oncoming lanes downtown where there is a physical barrier, Coffin said. While the district has few stops in that section of Main Street, Coffin does like it when oncoming drivers stop just west of 18th where there is a gap in the barrier to allow trucks to turn into driveways. 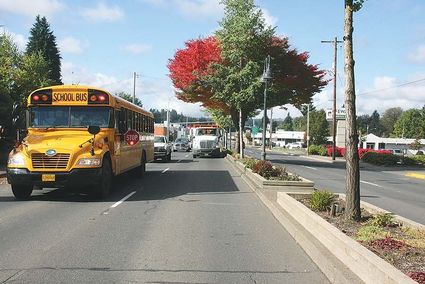 A SWEET HOME SCHOOL BUS stops traffic on Main Street with its red lights. This photo shows a location, with a physical barrier dividing the highway, where oncoming traffic is not required to stop.

The biggest problems are along Highway 20, and a stop in the 4600 block of Main is among the worst, Hicks said. On Highway 228, bus drivers see good compliance.

"Because it's such an issue, we're going to start stepping it up," said School Resource Officer Geoff Hamlin. "I'll be riding on the bus, and we'll have chase cars."

The Police Department will inform the public about an upcoming sting operation about a week in advance, Hamlin said.

Hamlin said that when officers pull over offenders, they usually claim they didn't see the lights or thought they were still yellow, but he has had one who admitted to being late for work.

When they're crossing the road when they shouldn't, bus drivers can issue them tickets. They start with a warning and then a ticket.

For the first ticket, they cannot ride the bus for three days. For subsequent tickets, the bus suspension is 10 days.