Police: Local wave of counterfeit bills reminder to be careful 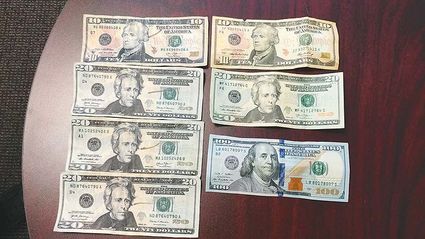 COUNTERFEIT U.S. currency, the left column, sits next to a column of genuine bills, on the right.

Sweet Home police are warning the public to be careful when receiving $10, $20 and $100 bills.

Police have taken several complaints recently from businesses that have received counterfeit bills.

At the end of September, a customer attempted to pay with a fake $100 bill at All Star Pizza. Police also recently collected a fake $100 at Towne Pump. Last week, Spoleto's restaurant took in three fake $20 bills and a fake $10 bill.

"They were really obvious," said Sgt. Jason Van Eck, adding that whoever made them did a poor job of it.

"The ink was smeared," he said. The bills were poorly cut a...