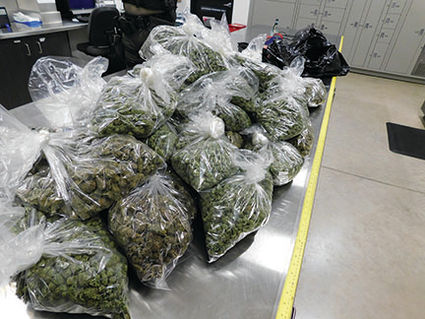 THESE BAGS of marijuana were discovered in a Jeep after the driver was stopped and arrested on an outstanding warrant.

A California man, arrested Sunday night by Linn County Sheriff's deputies after a traffic stop, was charged with unlawful transportation of marijuana after the discovery of 28 pounds of marijuana in his Jeep.

Sheriff Jim Yon said deputies stopped a 1996 Jeep Grand Cherokee that had defective lighting on Pacific Boulevard near the Motel 6 in Albany at 10:29 p.m. Sunday. During the traffic stop, deputies identified the driver as Billy St. Germain, 31, from California.

St. Germain did not have a valid driver's license or insurance on the vehicle. He was taken into custody for an outstandi...