Girls lose twice in soccer, to Cascade and Sisters 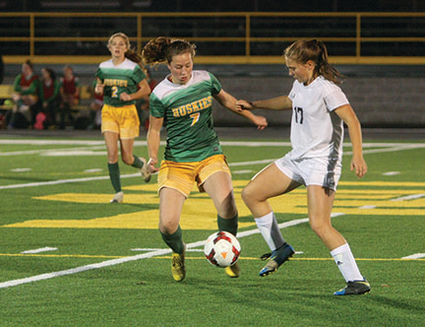 ESTHER RAMSEY battles for the ball with Cascade's Ariel Tobiasson. Ramsey scored a goal in the game.

Cascade scored twice in the first half of the game, while Esther Ramsey scored for the Huskies in the second half.

Cascade's goalie kicked it back to the middle of the field, and Ramsey took the ball, passing it to Emily Farthing, who passed it back to her, said Coach Ramiro Santana. A Cascade defender tried to kick the ball back to the goalie, but Ramsey never gave up, followed it in and took a point-blank shot.

Thursday, Sisters scored its first goal in the first 15 minutes on a c...