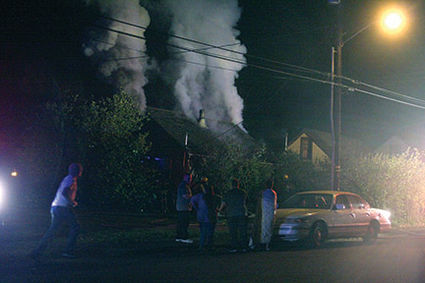 FIREFIGHTERS extinguish the flames in an attic at 1149 1st Ave. Friday evening, Nov. 1. Firefighters responded to the fire at at 7:01 p.m. to find smoke coming through the ends of the attic and neighbors putting water on the house with garden hoses. The fire was contained in the attic, said Battalion Chief Eli Harris. The attic was used as a storage space and was destroyed. The first floor sustained water damage. The apparent cause was combustible materials near a heat source, Harris said. The flue had material piled against it in the attic. The home is owned and occupied by David J. Reynolds. Harris did not believe it was insured. The American Red Cross and family members responded to assist Reynolds. Fifteen firefighters responded with four fire apparatus and two support units. No one was injured in the fire. See additional photos at bottom of this page.

11:37 a.m. - A 14-year-old juvenile referred to Juvenile Department for minor in possession of tobacco, 18th and Main.